SKULL OF YORICK PRODUCTIONS
our history

In 2011, Philip Modinos and Kassandra Dimopoulou, while still doing their Master in Arts at the Royal Academy of Music in London, decided to join their commune dream of producing operatic productions.  They started together a team and named in Skull of Yorick Productions.  In 2013 they moved back to Greece and continued their work making their base Thessaloniki.  The team collaborated with many different companies and in 2016 they started their own corporation and named it Hellenic Opera Co.
The following texts are from our former website, www.skullofyorickproductions.com
We decided to keep them and remember where it all started.


SKULL OF YORICK PRODUCTIONS
​is a fusion of forces all pulling against each other: historically, sonically, visually and even geographically.  Even though a London based company at first, Skull of Yorick Productions has already enjoyed being pulled to the far edges of Europe and beyond, having performed as much in the top North West corner of Europe (Ireland, the UK) as well as the bottom South East corner (Cyprus). Since 2013, the company is based in Thessaloniki.

But, as intense as this geographical pull seems, it pales in front of the pull of forces in the sound and imagery of the artists... A groundbreaking fusion... classical virtuosity in music and theatre combined with technology... opera meets heavy metal... classical theatre meets martial arts... a melting pot of all that is good in art... provoking a reaction to even the most skeptical of audiences... joy, anger, approval, rejection...

It is our greatest pride that our audience has never left our performances unaffected... and that is the purpose of all art: To be affected by it! 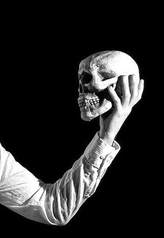 ​Yorick, a fellow of infinite jest

Yorick is a fictional character in William Shakespeare's play Hamlet. He is the deceased court jester whose skull is exhumed by the gravedigger in Act 5, Scene 1, of the play (see picture above). The sight of Yorick's skull evokes a monologue from Prince Hamlet on the vile effects of death :

​" Alas, poor Yorick! I knew him, Horatio; a fellow of infinite jest, of most excellent fancy; he hath borne me on his back a thousand times; and now, how abhorred in my imagination it is! My gorge rises at it. Here hung those lips that I have kissed I know not how oft. Where be your gibes now?"  (Hamlet, V.i)

Alas, we knew him well, as Hamlet did... for he bore us on his back a thousand times... as Yorick, as Rigoletto, as Pulcinella, as Arlecchino... always present, the tragic figure of the actor, the commedian, the person who forgets whatever may be on his mind in order to deliver to us the emotions that we came to experience... for a small price.  It is only too often that fate decides to take its course beyond our own control and so it happened with Yorick's influence in our lives as a symbol.

He came to us at the very beginning... as an image, a fluke of a picture that turned out too good to be ignored, that of a Pulcinella mask held by a hand... The image haunted us in our thoughts as an image that had to remain with us during all our performances and productions.  And even though the image was there, its identity would only be revealed to us much later, when all other names kept on failing... It must be something that transcends time and that will remain after we are gone.  And then it came... in a search characterised by abstract thought and constant rejection of every idea... the image... so similar to one of the most famous images in theatre... Hamlet holding the skull of the dead court jester.

Yorick is the spirit of all actors, dead or alive. The amazing Shakespeare wrote for an actor to "talk" to another dead actor on stage in one of his most famous plays. The image of an actor speaking to a dead actor, gives food for thought... Yorick was a court jester: even dead, poor Yorick still serves his mission: to play for a King! Isn't this a strong critique and a joke for both artists and audience alike?

And isn't the idea of a skull standing silent in front of an audience, the loudest thought about the vanity of art and life itself?

But the best part is to imagine that the skull of an actor is actually a mask!